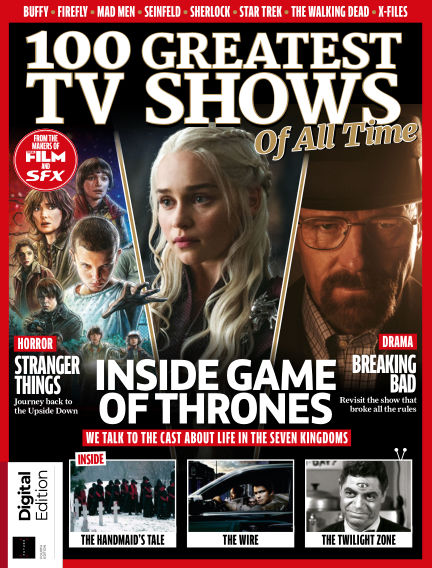 Enjoy 100 Greatest TV Shows magazine and unlimited access to over 4,765 magazines on your mobile and tablet. All the magazines you can read for just £7.99 a month.

TV has never been better than it is today. A bold claim? Perhaps, but look at the wealth of drama and comedy available – it’s of an incredible standard. Some say that, thanks to channels like HBO, TV is now better than the movies. We’d argue instead that it’s a different medium. Where television excels is in telling stories over a length of time that no other medium can allow. Mad Men may have made a fine film, but it would have been far less effective if we hadn’t seen Jon Hamm age over nearly 10 years. Doctor Who is beloved not because of any one story, but because for most of us, it’s always been there. And Game Of Thrones is epic in a way that makes The Lord Of The Rings look like a squabble. That’s why we’re delighted to present this celebration of our 100 favourite shows. When collating the list, we set ourselves a few rules. Documentaries are out – they’re a different kettle of fish, worthy of their own bookazine. We also skewed towards newer shows and series that have retained a strong cultural cachet. There’s a wealth of amazing archive TV out there for you to discover, but we decided to concentrate on the programmes that still have a buzz about them. Think of this as your guide to the best box set telly. As well as the list, there’s plenty to dig into from the SFX and Total Film archives, including interviews with the creators and stars of Breaking Bad and Better Call Saul, and pieces on The Simpsons, Twin Peaks, Mad Men and more. We hope, even if you disagree wildly with our list, that you’ll enjoy it.