Read All About History Book of Assassinations magazine on Readly - the ultimate magazine subscription. 1000's of magazines in one app

All magazines
All About History Book of Assassinations

All About History Book of Assassinations 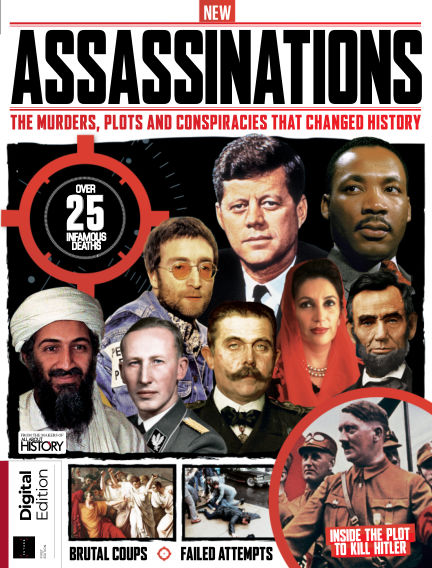 All About History Book of Assassinations

Enjoy All About History Book of Assassinations magazine and unlimited access to over 5,000 magazines on your mobile and tablet. All the magazines you can read for just £7.99 a month.

"Some events shock the world, others have irrevocably changed the course of human history. Delve into the murky world of coups, conspiracies and devious plots behind the most infamous murders. Whether the victims were powerful leaders, enemies of the state, outspoken activists or high-profile celebrities, the violent, sudden, and often very public nature of their deaths leaves a mark on our collective consciousness. Few would forget where they were when the news broke about the devastating deaths of JFK or Martin Luther King, for example – regarded by millions across the world as heroes, taken too soon by depraved acts of violence. When people lose their idols, particularly those with the power and potential to make great change, it leaves many feeling robbed of a future that could have been. While many assassinations are met with global outcry and mourning, this is not always the case. Eliminating one high-value target can turn the tide in the terrors of war. There have been many covert plots – such as those to kill Nazi official Reinhard Heydrich and Al-Qaeada leader Osama Bin Laden – that were seen as necessary evils for the greater good. Read on to examine the accounts, evidence and lasting impacts of over 25 notorious assassinations, and discover the failed attempts that would set history on a completely different path."