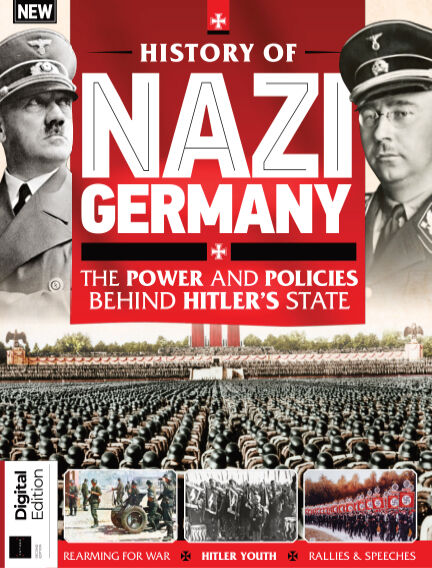 Enjoy History of Nazi Germany magazine and unlimited access to over 6,000 magazines on your mobile and tablet. All the magazines you can read for just £9.99 a month.

"The ascension of the Nazi Party from fringe fanatics to the undisputed rulers of a mighty Germany was a blood-soaked march that seized the lives and minds of a generation and bent them towards war. Commandeered by an ambitious young loner by the name of Adolf Hitler, the National Socialist German Workers’ Party finally achieved its ambitions of power in 1933 and immediately set about rearming a recovering Germany for what would be the greatest conflict in history while excluding the ‘undesirables’ within the population it sought to completely control. From ostracizing and then murdering Jews to destroying all political opposition and indoctrinating the nation’s children via the Hitler Youth and League of German Girls, the Nazis enforced their will via cunning propaganda and the ruthlessness of the Gestapo. This bookazine will delve into the dark roots of the Nazis before exploring their stunning grab for power and the effects of their brutal policies on the German state, which ultimately created a nation that reflected the racial and social beliefs of one of history’s most hated figures. "