All magazines
History of War Book of Dunkirk

History of War Book of Dunkirk 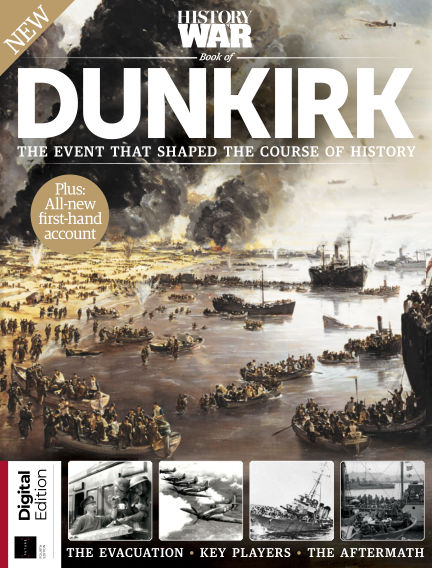 History of War Book of Dunkirk

Enjoy History of War Book of Dunkirk magazine and unlimited access to over 4,850 magazines on your mobile and tablet. All the magazines you can read for just £7.99 a month.

"Discover the true story behind the iconic rescue mission that saved the lives of thousands of Allied soldiers during the Second World War. The History of War Book of Dunkirk examines the events that led up to it, how the biggest evacuation in military history unfolded, from the plans and decisions made, to the ships, weapons, and key players involved. This essential companion also includes frontline photos and exclusive first-hand testimonies from those that were there. The Build-up - Learn all about the significant events of World World II that led to the Dunkirk evacuation taking place. The Evacuation - Discover how such an epic rescue mission that saved lived thousands of lives was planned and carried out. The Aftermath - Find out what happened next, analyze crucial decisions made, and assess views on whether it truly was a miracle. Key players - Examine in-depth profiles of the commanders involved, both before and during the Dunkirk evacuation. Also inside... - Preparing for the German invasion - Key player: Heinz Guderian - French disaster unfolds - Fighting retreat to Dunkirk - Key player: John Vereker (Lord Gort) - Desperation at Dunkirk - Key player: Bertram Ramsay - All haste to Dunkirk - Escaping Dunkirk - The curtain falls at Dunkirk - Key player: Gerd von Rundstedt - The role of the Royal Navy - The shadow fleet - The role of the RAF - The weapons of Dunkirk - A victory inside deliverance - Facing fresh challenges - The ‘miracle’ of Dunkirk? - What if… Heeresgruppe A had been bombed in the Ardennes?"