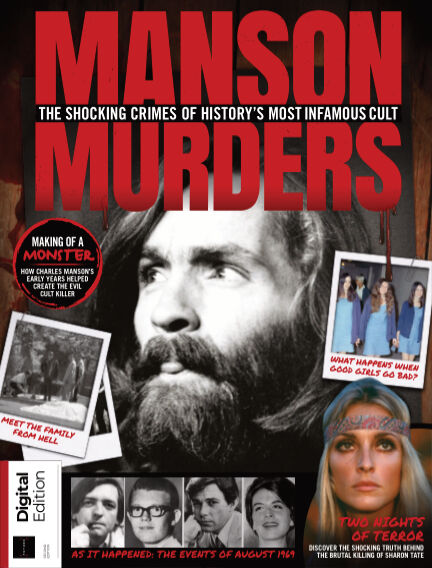 Enjoy Real Crime Manson Murders magazine and unlimited access to over 6,000 magazines on your mobile and tablet. All the magazines you can read for just £9.99 a month.

On 19 November 2017, Charles Manson died in prison at the age of 83. The world’s most notorious cult leader was gone, leaving behind him a legacy of death and destruction. Under his command his ‘Family’ had brutally murdered at least nine people, including Hollywood actress Sharon Tate, who was eight months pregnant at the time of her death. Fifty years on from Tate’s cold-blooded killing, we relive the shocking events of those two nights of terror in August 1969, the Family’s first forays into violence and the dramatic trials that followed. But who was this ‘Family’ from hell and why did they follow the twisted instructions of a madman? Did Charlie’s early years play a part in the shocking crimes of the 1960s? Why were young women drawn to Manson and his sadistic cult? And what was life really like inside the Manson Family? Discover the answers to these questions and more in our fascinating features and in-depth articles.