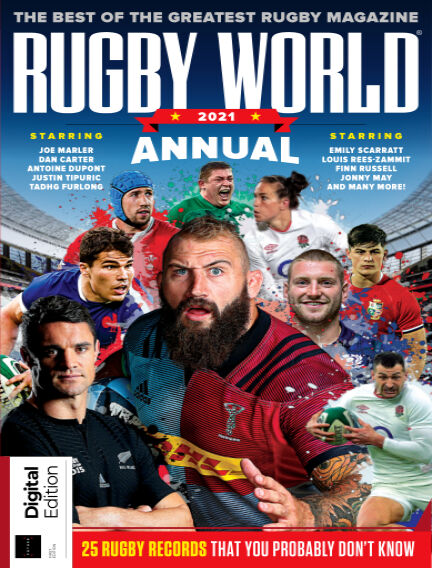 Enjoy Rugby World Annual magazine and unlimited access to over 6,000 magazines on your mobile and tablet. All the magazines you can read for just £9.99 a month.

"Welcome to the Rugby World Annual, packed full of the best features, interviews and exclusives from the world’s greatest rugby magazine over the past 12 months. There are a host of features on rugby record breakers. All Black Dan Carter, the top Test point-scorer, reflects on his life in pictures while England’s most-capped player, Rocky Clark, talks to Stephen Jones about her career and the current state of women’s rugby. We also bring together England men’s top try-scorers Rory Underwood and Jonny May as well as highlighting a few more unusual records. There are exclusive interviews with 2021 British & Irish Lions stars Louis Rees-Zammit, Sam Simmonds, Finn Russell and Chris Harris, alongside tales from previous tours to South Africa. Plus, there is a look at incredible stories from around the world, such as the Italian club taking on the mafia and how the Lebanon rugby community rallied after last year’s explosion. With analysis of top teams and players as well as advice on particular skills, there is everything a rugby fan could want!"